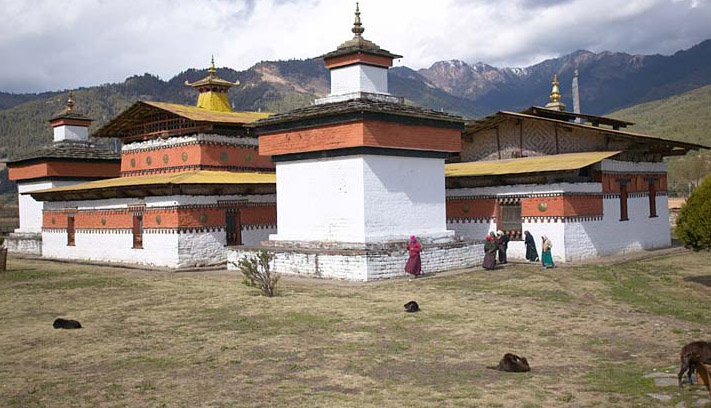 Jambay lhakhang is located in Bumthang. It’s a ten minutes drive to the temple from the Chamkhar town.One of the most spectacular festivals in the country, called Jambay lhakhang Drup is hosted here. The festival lasts for five days beginning 18th October to the 22nd (check with your tour operator to confirm these dates).

The highlight of the festival is the fire ritual that is held in the evening where crowds gather to witness the ritualistic naked dance.

Jambay Lhakhang is one of the oldest temples in the country, founded by Songtsen Gampo, a Tibetan King in the 7th century AD.  The king was destined to build 108 temples known as Thadhul- Yangdhul (temples on and across the border) in one day to subdue the demoness that was residing in the Himalayas. Of the 108, two were built in Bhutan. While Jambay Lhakhang is one, the other is Kichu lhakhang in Paro.

Legend has it that Guru Rinpoche visited the site several times and deemed it exceptionally sacred. Chakhar Gyab, the king of the Iron Castle of Bumthang, renovated the temple in the 8th century AD.

The first king of Bhutan, Gongsa Ugyen Wangchuck constructed the Dus Kyi Khorlo (Kala Chakra- Wheel of Time) inside the temple, to commemorate his victory over his rivals Phuntsho Dorji of Punakha and Alu Dorji of Thimphu after the battle of Changlimithang in 1885. Later, Ashi Wangmo, the younger sister of the second king of Bhutan, built the Chorten lhakhang.

The main relics include the future Buddha, Jowo Jampa (Maitreya) from whose name the present name of the temple is derived. The lhakhang also houses more than one hundred statues of the gods of Kalachakra built by the first king, in 1887.