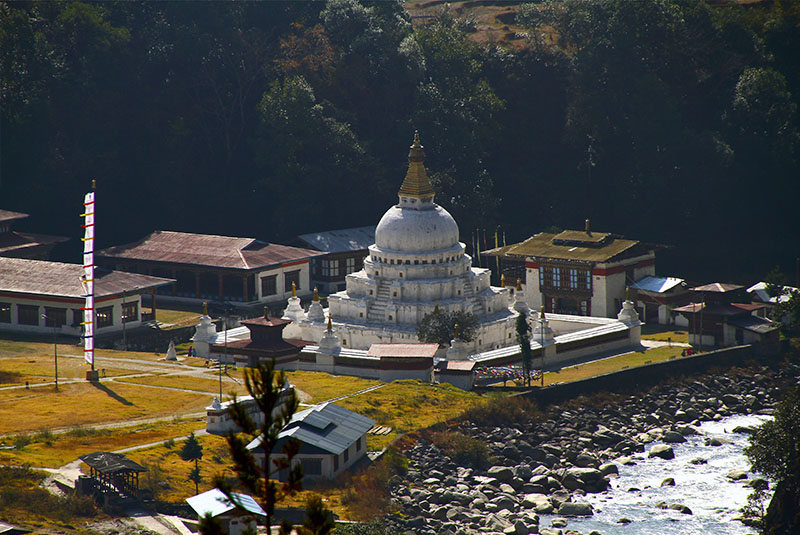 The Chorten Kora Festivalis set in Trashiyangtse, the easternmost district of Bhutan. Trashiyangtse is about two hours drive from Trashigang, along the banks of Dangmechu and Kholongchu rivers.

The festival comprises two events, the Dakpa Kora and Drukpa Kora. Dakpa (referred to people from across the border in Indian state of Arunachal Pradesh)Kora (circumambulation) is held on the 15th day of the 3rd month, corresponding to 28th February. Drukpa Kora (circumambulation by the Bhutanese) is held on the 30th day, corresponding to 15th March every year.

The Chorten (Stupa) stands on the site where a demon was subdued by Lama Ngawang Loday in 1740.  It is believed to be a replica of the Boudhnath stupa in Nepal.

Consecrated by the 13th chief Abbot of Bhutan Je Sherub Wangchuk, it is considered one of the most important historical Buddhist structures today. Legend states that a young girl from Tawang, believed to have been a Khando (Dakini) agreed to be buried alive in the Chorten as a “human treasure”. For this reason,Dakpa Kora is organised every year where hundreds of people from Arunachal Pradesh make it to Chorten Kora to circumambulate.